I finally got back out to row yesterday.

To get to the closest lake that is big enough for me to get any mileage without doing laps, it is a 63 mile round trip. It has been so cold, I hadn’t gone out for the last month or so! But I spotted a sunny day that would get as warm as the high 40’s with 1 or 2 mph wind and was determined to go. I wanted to time my arrival to when the temperature got over 40º. I wish now I had gotten an earlier start. I will chalk this trip up as just a fact-finding mission to determine the strategy, gear and choreography of rowing in cold weather. I learned a lot!

It was touch-and-go when I got up there and had to stop to check in with Deputy Dodd sitting in his car guarding the ingress. He said the lake was closed, but he didn’t know if it were just to motor boats — so he had to radio in to check. They said it would be ok for me to row. He asked when I would be through and I said I would come off the lake at dusk.

I had intended to be on the water by noon, but with the above mentioned delay and the imperative to stop for gas, it was nearly 1:00 before I launched. This is a wild lake controlled by the Water Works Board with only a smattering of really old cottages on it that must predate the Water Works taking the lake over and the only way to get to them is by boat from one launch site. I have to wade in the water to put my boat in at the corner of the boat ramp, stepping precariously on baseball to football size rocks that are steeply banked. Not such a bid deal in the warm weather, but a shocker this time of year.

These pictures show the difficult launching conditions of rowing boldly where no man has rowed before!

I chose the right day: a crystal blue sky and the water was glass. It was also in the low 40’s but I pealed off my shirt after a mile and rowed sleeveless. I fiddled a lot for the first 5 miles trying to get myself situated with new rowing conditions. The neoprene socks were bugging me so I switched to water shoes. I usually row barefoot since it is a open water racing scull that has straps instead of shoes. This time I wished I brought socks since toward the end my toes were getting cold. I always row with music and I put my iPod a shuffle of all the songs instead of my rowing playlist that has only higher cadence songs. I wanted to just take it easy and concentrate on form. Everyone thinks I need to square my blades earlier on the catch. We’ll discuss that more later. I could tell I had lost some strength. I didn’t want to make any mistakes by trying to push too hard. I have never capsized in a single, and this was not the day to tempt fate on that. I kept my pace to about 6 miles an hour.

On my way out to do the perimeter of the lake clockwise, I passed by the place where my friend Bob (the camera guy for the rowing music video) has a house. I was astounded at how their boathouse was just pitifully dangling on the steep exposed bank. The water level was lower than ever. Here is an areal view of what it looked like once the water level began to fall, and where the water line is now: 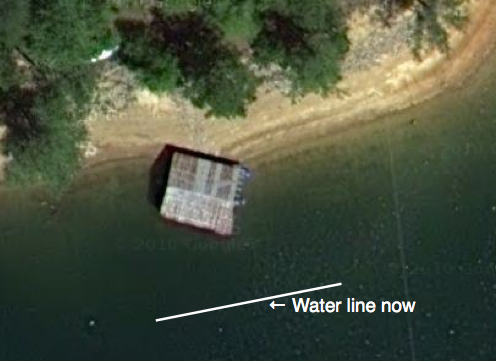 I was going to take a picture of it with my iPhone on my way back in but missed it. I was within a half mile of it and would have rowed back to it but I was within sight of the docks and saw two vehicles with their lights on parked by my car atop the hill. I assumed they were Deputies waiting for me to come off the lake (taking a head count: one on, one off) and I didn’t want to push my luck with them so I reluctantly concluded my adventure.

It was 43º according to my car when I got off the water. It felt colder since getting out of the boat meant getting my feet and hands wet in the frigid water. Thankfully the bathroom there is well heated and I changed into warm clothes immediately. I didn’t feel chilled all day until my appendages got wet and it got dark. It made me know that capsizing this time of year would be a serious no no. I had a change of clothes in zip lock bags on the boat with me just in case. I had water to drink with me, but didn’t even take a sip. I ate a few bites of an apple periodically and that was enough to keep me hydrated in the cold.

Having gotten chilled did make getting my boat loaded on top of my car and secured really challenging. My fingers were so numb they were blue. Even with gloves on I had practically no dexterity. I will devise some kind of portable launching dock to keep from having to get wet getting in and out of the boat. I am crunching ideas in my head.

I am also glad I had the route on my GPS screen as the sun was so blinding in spots I could literally not see the bank and had fly by instruments. I knew if I kept it inside the line I would be safe from the shrinkage of the perimeter.

The perimeter of the lake is supposed to be 26 miles. Hugging the banks within 20 feet, I have gotten 22 miles at the most. It was even less yesterday. We’ve had some rain. When is the water level going to rise again? What’s going on? Is the Climate changing or something? 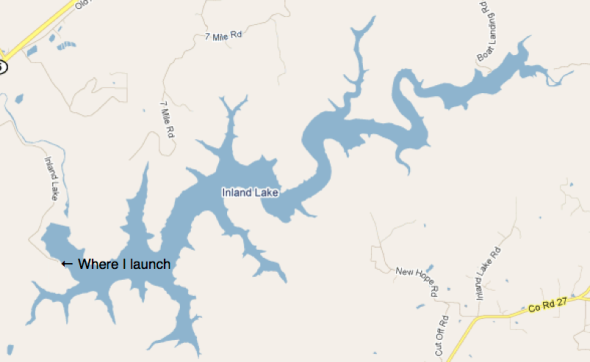 You can see that if I am hugging the bank, I have to do a LOT of steering. That’s why I find it so handy to not have a skeg. Having lost it repeatedly at the lake where the rowing club is located because of the treacherous shallow water conditions there, I discovered I didn’t need it for stability and it doesn’t even affect me much in higher wind conditions. I did 30 miles the day we shot the rowing music video in wind and chop without a skeg not realizing I had lost it again probably at the launch on the rocks there — and LOVED the maneuverability. I have a replacement skeg sitting in my rowing bag … but decided to fill the slot with styrofoam instead.

I had the whole lake to myself aside from the company of about 25 eagles and 1 heron.

At the spot where Bob had perched on a cliff to take slow motion shots of me from above, we stopped for a while when we saw a Bald Eagle and he shot it in slow motion diving repeatedly at a fish. Yesterday as I rowed past the same cliff there were 20 (I counted several times) hawks flying overhead. Then out at the mouth of that finger of the lake there were 5 more. They were up pretty high, but I thought I could see the white of their tails glint in the sun. Next time I go I will take my little binoculars to determine for sure if they were  hawks. They might have been vultures, I suppose. But I want to believe they were 19 hawks and at least one Bald Eagle since it was exactly where we saw one before. I want to believe it was a good omen of good things to come.

Except for the first mile of this row, I have never worn sleeves to row in 17 years. But when the sun went down behind the trees at about 4:30, I decided putting a long-sleeved shirt back on would be a good idea. It really felt strange to see sleeves on my arms. Sundown was at 4:45.

I would have had time before dark to have rowed an even 20 miles, but since I knew I had been spotted, I came in at 18.5 miles. It was enough since I hadn’t rowed in a while. I’m not sore at all today … and have no blisters on my hands, so I am sure I can painlessly build my mileage back up in no time provided I get on the water earlier in the day. Unfortunately there are no promising looking days coming up in the ten day forecast.

But yesterday, I Carpe Diemed!

This entry was posted on January 4, 2011 by globalrowingclub. It was filed under Personal Story, Pictures, Rowing, Sculling and was tagged with long distance sculling, rowing, sculling.