Very good question. I haven’t been keeping up with adding to this blog for a good while either. So here’s the condensed version:

If you have been following my rowing stories, you will recall in the winter I really smacked my left shin running into something in the dark, didn’t ice it right away and actually forgot it even happened. My next row was on February 20th. I rowed 45 miles and I wondered why my left shin began to hurt. Next thing you know, I could barely walk for weeks. I even went to have it ex-rayed because I thought I had fractured it.

The next time out was March 27th at Lake Purdy to test my leg on the smaller lake where the rowing club is located. I am glad I only did 8 miles that day, taking it easy rowing slowly chatting with my friend Bob.

I stayed at Lake Purdy from then on as the water levels were back up and worked my mileage back up to 34 miles by April 19th. I really meant to do 50 or 60 miles that night, but I got a call from my new volunteer intern/assistant who was flying in on April 21st from Venezuela and once stopped for more than a few minutes, I got way too chilled to keep going, was floating right by the dock, so it was too tempting to just call it a night and get warmed back up ASAP in a heated car.

Then upon my new assistant’s arrival, our time was taken up with getting her trained and adjusted to all the workings of my multi-faceted business, health, sports, save the world way of life. It was going great and we were having a blast. But my personal rowing time was taken up with training her to row in a double. It was great fun, but not my usual work-out.

Then just as we were hitting our stride and making tons of progress, I got a call from my brother that my mother had a stroke. Next thing you know I’m on my way up to Maryland. Thankfully Trina made the trip with me in the hopes that we could continue to get some work done, but the friend we were staying with had no internet access and the only time we could get online was at the hospital … a two hour drive in traffic both ways from where we were staying. We never got to bed before 4 am in the morning. The strain of the trip did us both in. 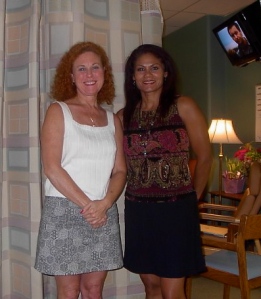 Thankfully, when the dust settled on my mother’s acute episode, the doctor explained to me that her blood pressure had simply spiked way too high, and the worst of her damage was just being kept in a hospital bed for two weeks losing all of her strength while they were trying to get her blood pressure medication adjusted. By the time we left, she was her old self again. But between the 15 hour drive there (Trina obviously could not help with the driving) and the 15 hour drive back … and the minimum of 4 hours of driving every day we were there, and no rowing to keep my joints pain free, my old right hip injury decided to kick up into a full blown bout of non-stop pain and barely being able to walk AGAIN.

I was so depleted by the over two week trip of non-stop impossible circumstances, it was a week before I was even close to being myself again emotionally and being in constant physical pain was not helping at all.

I knew the only way to get it under control was to get back out rowing and Trina and I made it out once in the double, but again … 8 miles is not sufficient physical therapy for my abused joints from a life-time of extreme sports.

Then all of a sudden, we started getting intense interest from South American about my medical device invention and Trina and I spent a couple of weeks writing, compiling and translating already existing information into Spanish for her connection there to submit for consideration.

Then to make matters simply impossible, the weather forecast for every week since our  return from the Maryland trip has looked like this: And still does. This is from today:

Trina is off visiting family in Miami and trying to get a customs matter straightened out about some things she had shipped from the UK to Venezuela so I was determined to go rowing by myself again Friday. The weather as usual promised scattered thunderstorms so I called my chiropractor and made an appointment for 3:30 to get my hip adjusted. But I told him if it weren’t raining, I would go rowing to adjust it that way instead. He’s a Global Rowing Club supporter and knows me well. When I left having lunch with a friend, I called to say it wasn’t raining and rowed mind-numbing laps at Lake Purdy for 36 miles. I felt GREAT.

My hip is pain free again, but I still have to put in some more miles to get it completely back to normal.

I had my gear all ready to go back out to Inland Lake early this morning for some REAL mileage because the weather showed no signs of thunderstorms last night, but the big thunder claps started extra early and it has been dark and ominous all day. Tomorrow looks the same, but I will still try to get out early and hopefully dodge the scattered storms. When it is 95 degrees (35 Celsius) I don’t mind getting rained on. Getting hit by lightning might give me super human powers, so whatever happens, it’s a win win — the way I see it.

I just have to row again, darn it!

So there it is … why I have been conspicuously silent in my blog posting … and took a hiatus from rowing. Life got in the way.

This entry was posted on July 10, 2011 by globalrowingclub. It was filed under Personal Story, Pictures, Rowing, Sculling .