Jen’s and My Most Excellent Caribbean Adventure 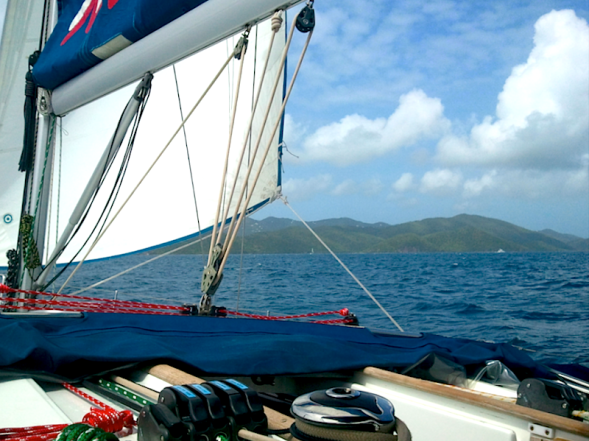 As Jen has written, she, my dear friend Captain Butch and I spent eight wonderful days and nine lovely nights aboard the Chanticleer, a 43ft. sailing yacht, in the British Virgin Islands earlier this month.  Since our return I’ve not had an opportunity to write about this epic adventure.  Perhaps I’ve been in denial about being back and could not quite bring myself to admit that I am not going to wake up from the dream to find myself being gently rocked in my cabin aboard the good ship Chanticleer.  Alas, it is true, I am indeed back in ‘real life’, on dry land.  So, I shall soothe my land-locked psyche with reminiscences and observations about our delightful time together in Paradise.

I impulsively invited Jenifer to join us on the trip before even meeting her in person.  Her ad for a mini eco-community appeared right before my eyes on craigslist on a page I seldom visit. I went to her website and felt an instant affinity.  I e-mailed her immediately to say, “I HAVE to meet you!”  But later I e-mailed it would have to wait a couple of weeks since I was going on this cruise, that is, unless she wanted to come along.

Amazingly, she accepted.  She explained later she often receives invitations to join friends, all expenses paid, in wonderful destinations (Puerto Rico, Costa Rica, Long Island …) and has turned them down to continue to work.  But this time she said when she read the obviously casual invite…bells and whistles went off and she KNEW immediately she was going and that somehow all the logistics for making the arrangements in 48 hours would fall into place.  She told me she had just made the decision that from now on in her life ‘all is easy.’  And easy it was.

Prior our departure…for a moment I was a wee bit (but only a wee bit) concerned about spending eight days on a boat with someone I’d only met a few days before.  In spite of the fact that Jen and I connected very deeply immediately upon e-meeting, one never knows what may happen when one is traveling with folks, but my wispy concerns were quickly swept away on the Caribbean breeze and we deepened our new friendship to the point where I truly cannot remember when Jenifer was not in my life.  It is as though we are long-lost sisters who reconnected (finally) in this life to continue walking our previously parallel paths together.

Butch and I planned the trip to be a vacation, and so it was.  When Jen joined the crew as First Mate, however, we all agreed for the trip to become a “FreeWill” tour for The Global Rowing Club as well.  I had been very deeply moved and intrigued by all I read on this website (though I still have much reading to do as I have only begun to scratch the surface) and I felt a resounding resonance with her purpose…it is congruent with mine, though I have been hesitant to publicize this fact to all but the few in my life who are of like-mind.

Yes, Jenifer seemed too good to be true.  Butch had pronounced that she had saved our trip the first night we met in person, but we took her at her word that she knew how to sail and it remained to be seen.  What I learned about Jenifer from discovering she is in fact an accomplished and knowledgeable sailor who far exceeded any expectations Butch even dared to have…is that nothing she says or writes about herself can even come close to the truth of who she is, let alone overstating or bragging.  I did not find egoism in her.  She delivered the goods and then some.

I had only been sailing a few times before with Butch, a couple times as a fledgling first-mate-in-training, but mostly as a novice deck hand / passenger.  This trip was different; as the sailing lingo (much of it still Greek to me) flew between Butch and Jen, Jen would stop and explain the words and the geometry of sailing to me to keep me in the loop.  She even spent several sessions to teach me a few ‘must know’ nautical knots.  She apologized that she could only teach me a ‘left-handed’ bowline, the absolute ‘must know knot of all!’ Even Butch got into it.  I graduated with flying colors when I could tie one in less than 5 seconds without looking!!!  I learned a lot and advanced from novice deck hand and ‘galley wench’ to become quite a useful second mate. Now Butch is bragging to everyone he’s never had a better crew.

As we island-hopped along Sir Francis Drake Channel in the BVI, we saw many beautiful aspects of Mother Earth, taking hundreds of photos in efforts to capture the exquisitely pure beauty She offers.  We also connected with several truly remarkable people along the way.  All the while, the bond between we fellow mariners continued to grow in subtle and not-so-subtle ways, allowing for a very peaceful, drama-free (what is that???) experience.  When one spends nine days on a boat with someone, one gets to know them quite well as closely confined quarters tend to engender familiarity, be that positive or not.  I am happy that my excursion with a new, hitherto unknown friend was a very positive experience.  I found Jenifer to be a deeply genuine person, consistently and vehemently true to and on point with her Purpose.  She never misses an opportunity to share her visions, dreams, hopes and purpose with those who have ears to hear.  She walks her talk.  How extraordinarily refreshing and hope-inspiring…

At this point, I am still not clear about exactly where we were when, as we visited so many places.  Jen called our trip: “If It’s Tuesday It’s Belgium.”  But she is putting together a slideshow for this website and for Butch to present to his Yacht Club, and Butch will fill us in on what pictures were taken where so I can bring back into focus the blurry edges of my memories and put names to places.  Or not…perhaps the magic of such a fabulous experience lies partly in the misty remembrances and all I truly need is to be able to close my eyes and have a soothing sense of brilliantly blue waters, lush green mountainsides, the gentle (and sometimes not-so-gentle) rocking of Mother Ocean underneath me, and delightful companions, to the soundtrack of Quito Rymer in the background, singing, “I’m going back to the islands….”

I now have no doubt I will be going back to the islands with Jen to assist with several projects our visit there may have catalyzed.  I observed how she interacted with people: influential people as well as shop workers and waitresses who she treated the same…no difference in the high level of respect she showed everyone.  She discussed the spectrum of possibilities encompassed in her plan according to the interests of the person with whom she chatted…with passion and compassion and was very well-received.  I became even more convinced as I learned more and more of how much she is capable of co-creating with people and organizations to propel them forward in realizing their goals and dreams…as in every case, their projects are already on her flow chart of Revenue Streams.  She truly is meant to facilitate people and organizations to be able to get beyond their present limitations.  The biggest obstacle for Jen is exactly that she does seem too good to be true.  Somehow, there has to be a way to get people to trust their first impressions of her and open up to how she can help them as “the benefactor of dreams.”  I have the opportunity in person to experience Jen in the way she presents herself on this website…as a real person, strong and fragile, capable, enduring, unflagging in her optimism and infinitely willing to go anywhere and do whatever it takes.  She has given everything she has to remaining true to her calling even to the point of being willing to lose everything.  She is reaching out for help so that she can help.  She is for real and my synchronistic discovery of her was a miraculous answer to my own prayers to be able to live and do my purpose.  I will do whatever I can to promote and ultimately bring to fruition The Global Rowing Club’s vision of proliferating The Cosmos Renewable Off-Shore Energy Platforms in the seas and oceans of the world.  This is a Big Dream, but I have always believed in my Heart of Hearts (if not always in my limited human understanding) that if it is indeed in line with the Universe, it will be.